In the late 1990s I was an awkward teenager living in Kabul, Afghanistan. Up until that point my education had been a hodge podge of schooling from a tiny primary school in Saskatchewan to homeschooling and boarding school abroad. Now, in my final years of high school I had opted to complete my schooling by correspondence. This had been my choice for two main reasons: I wanted to live at home with my parents and I loved the adventure of living in Kabul.

As a requirement for my graduation I had to complete a Physical Education course. This was not particularly easy to do by correspondence, and involved a number of hours in various sports that had to be signed off by supervisors or witnesses. And so I rode my bike, jogged, swam at a swimming pool in the United Nations guesthouse compound and played badminton with my dad. For the final activity I spoke to a young Afghan friend who helped me sign up at his local gym.

Each morning I would get up before six. Our chaukidar – which translates as watchman or guard – would quietly knock on my bedroom window to wake me. I would then slip on my gym clothes and step outside onto the dusty street where I would hop on the back of my Afghan friend’s bicycle and brace myself against the chill of the cold morning air.  As we rode along, we would chat in a mixture of Farsi and English, each one of us fighting to practice the other’s language.

We would arrive at the weight lifting club and lock up the bicycle along with the many other ones parked outside.  The gym itself was dimly-lit, with little decoration apart from a large sign reading “Health is Wealth” in English.  Sweaty and muscular men worked through their morning routines. There was a fair amount of equipment; some was designed for use in the gym, while other equipment was improvised from car parts or scrap iron.

The club was run by a man that everyone called Ustaz.  He was by far the most muscular man in the gym, and carried an air of authority and arrogance that was rather off-putting.  After signing a book and paying a small fee, I became an official member of the club.

As the days passed and I continued to come to the club, I quickly learned by observing the others to greet the Ustaz first when I entered the gym.  His response was always a very minimal (for an Afghan) and unenthusiastic “Jor asti?” (“Are you well?) He initially treated me with relative indifference until a certain event that seemed to act as my initiation.

One morning, I sleepily and stupidly removed some weight from one side of a bar while it was still sitting on the bench.  The weights on the other end fell, flipping the bar right past my face, and clattering loudly on the ground.  An eternity of silence followed, and everyone in the gym stopped to look at the dumb new foreign kid.  The Ustaz finally broke the silence, bellowing out “Kame fekr ko!” which means “Think a little bit!”  I cowered by the wall, muttering “Yes Ustaz – sorry Ustaz – it won’t happen again Ustaz.”  When he finally decided that I had repented enough for my mistake, he began to soften, and explained that he didn’t want me to get hurt.  From that day on, he treated me as a friend.

For many, the club was as much about socializing as it was for exercise. Occasionally, we would head to a chaikhana following our workout where we would eat a breakfast of cake and hot milk.  We would all pitch in a little bit of money for this, and if there was any left over, it was used to buy one or two raw eggs for the Ustaz to mix into his milk.

There were a number of interesting characters at the club.  Shams, a tall and skinny man would often complain to me that although he had a number of relatives living in Canada, none of them ever sent him money.  A young Arab man who spoke Farsi with an accent had come to Afghanistan to fight the Russians, only to find out that the Russians had long since gone.  A middle-aged bear of a man told me that he needed to lose some weight.  “The Ustaz tells me to stop eating rice,” he explained, “but I like rice, so what can I do?”

My personal favorite was a man I nicknamed “Mr. Thesaurus.”  He actually never worked out at the gym himself, but would stop by to chat.  He often tried to practice his English with me, and added as many synonyms as possible to impress me with his vocabulary.  This unique way of talking, added to his strong accent and the fact that he also talked as fast as he could, made him nearly impossible to understand.  Once he invited me to his house for breakfast:  “I would be very exultant-happy-cheerful-joyful if you would come with me to my house!”  Other times he was more serious: “The situation for the people-masses-multitudes of Afghanistan is very difficult – haggeldy-baggeldy – pel mel.”

After the workout, my friend would give me a ride back to my house on his bike.  Shams would sometimes come with us as he lived nearby.  I would then give Shams the polite but insincere invitation to come and have tea at my house by asking the question in the negative. “Won’t you come and have tea with me?”  I didn’t want to spring a surprise guest on my mom that early in the morning.

Several weeks later I had accrued the necessary hours to pass my PE course. The Ustaz signed my paper work and I sent it off to Saskatchewan. 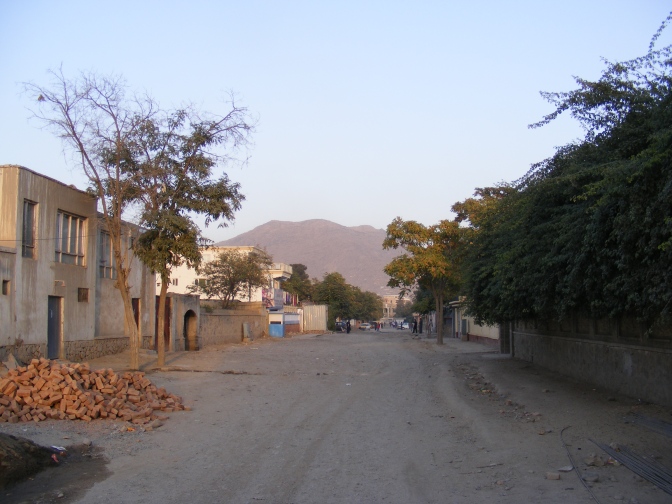